Sierra Nevada trees have noticed it’s getting warmer, and they are voting with their feet.

But the Sierra Nevada’s high-elevation trees are adapted to cold. So, they are moving uphill, where temperatures are relatively cooler year-round, researchers found in a study published in 2016.

“Climate change is pretty much what this (study) is all about,” said biologist David Wright, now retired from the California Department of Fish and Wildlife and the lead researcher on the 2016 paper.

Starting in 2002, Fish and Wildlife scientists counted how many young trees grew on 381 plots at different elevations along the Sierra Nevada. Young trees are old enough to show they can make it in the climate where they sprout, Wright explained. Then, researchers compared their findings to detailed tree surveys taken by the United States Forest Service 80 years earlier.

Of the 12 tree species studied, three of them – red fir, western white pine and mountain hemlock – already live above 6,000 feet altitude. But the researchers found more young trees at that altitude compared to 80 years earlier.

Red fir so dominates those high-elevation forests that the larger habitat is moving with it. “That’s a big change in the habitat over a wide area,” Wright said. Red fir provides shelter for mammals and birds, and western white pine produces a nutritious seed that many species eat. That impacts all the species that depend on the trees: For example, related research has found fewer species of birds in the forest than before, he added.

The mountain hemlock, a graceful conifer that loves the highest climes, is getting hard to find below 8,000 feet, and now lives at an average altitude of 8,528 feet, the study found. That means it’s also growing rare in the northern Sierra, where, few mountains rise above 8,000 feet.

Tree populations and the habitats they support also are impacted by geometry: Mountains are basically cone-shaped. The higher up trees move, the less room they have, and the overall population shrinks.

That’s why mountain hemlocks still can be found on “cool, north-trending slopes and places with some moisture,” Wright said. But he added, “They’re in danger of popping off the mountain-top, (pushed by) a rising tide of warm air.”

Rising temperatures during both winter and summer have a profound effect on the amount of water available to the trees, Wright said.

Higher winter temperatures mean precipitation is less likely to fall as snow and stay there all winter, when snowpack would historically keep things chill and let the soil slowly soak up snowmelt. Instead, precipitation falls as rain, and it quickly runs down the mountains.

Meanwhile, scientists expect temperatures around the world, including along the Sierra Nevada, to continue to rise. If human-made greenhouse gases such as carbon dioxide and methane continue to be put into the atmosphere at the current pace, climate models predict regional temperatures could rise 7 to 10 degrees F by the end of the century above the average temperatures measured from 1981 to 2000. That’s according to a 2017 study by researchers Neil Berg and Alex Hall, of the Department of Atmospheric and Oceanic Sciences at the University of California, Los Angeles.

Some high-elevation trees, like the mountain hemlock, will run out of mountain to climb up. For the trees that can tolerate the hotter climate, water will become even more scarce – even if the Sierra Nevada receives the same amount of precipitation.

“The same amount of water in a given year is biologically less water when the temperature is warmer,” Wright said.

An earlier version of this story was published at YubaNet.com and in the print edition of The Union (Grass Valley, Calif.). 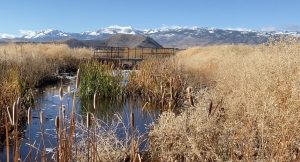