Dee the desert tortoise gets a new home

Kym McDonough is in a race against the clock—the biological clock, that is, of the desert tortoise.

With summer giving way to fall, Nevada’s state reptile population is inching closer to brumation—the cold-blooded version of hibernation in which tortoises hunker down in burrows to get through the cold months, occasionally rousing from their slumber on warmer winter days.

Time is ticking for McDonough—Northern Nevada adoption coordinator for the nonprofit Tortoise Group—to find a new home for Dee, an adult desert tortoise being given up for adoption by her elderly Reno caretaker. It’s McDonough’s job to find new homes in the Reno area for pet desert tortoises whose caretakers either cannot or no longer want to care for their crawling critters anymore. Tortoise Group is the only organization allowed by Nevada’s government to carry out legal adoptions as a means of conservation for this federally endangered species.

“My job is not only to adopt out, but also to educate,” said McDonough, who hosts brumation clinics to show tortoise caretakers how to make their critters comfy come sleep season. “A lot of people don’t even know that it’s something that you can do up here,” she said of legal desert tortoise adoption in northern Nevada.

Although Dee is being adopted out of Reno, most tortoises that McDonough relocates get hand-delivered to her by a Tortoise Group colleague making the long drive from Las Vegas. Although wild desert tortoise populations in their native Mojave and Sonoran deserts have been declining — largely the result of human encroachment on their habitat, according to the U.S. Fish and Wildlife Service (FWS ) — captive desert tortoises are experiencing just the opposite problem: the greater Las Vegas area is home to an estimated 150,000 pet desert tortoises, according to a 2018 study by the University of Nevada, Las Vegas. The FWS points to uncontrolled breeding as the cause of such staggering numbers, thousands of which end up as unwanted pets, according to the agency.

Fortunately for tortoises, they can live outside their climatic comfort zone of the southern reaches of the Silver State, provided the right custodian comes along.

That’s right: custodian. Per state law, desert tortoises who live in Nevada—whether in the wild or in captivity—belong to all three million people of Nevada. Custodians are entrusted by the state to act as legal guardians, but only upon a rigorous yard approval process conducted by Tortoise Group staff such as McDonough.

Shari and Sarah Byrnes went through such a process earlier this spring. The mother-daughter duo met with McDonough in the Byrnes family’s south Reno backyard to find out what changes they would need to make to their property before it could be deemed tortoise-friendly. Among the requirements: fencing around their garden to block flowers poisonous to a tortoise, such as calla lilies; planting of flowers healthy to a tortoise, such as honeysuckle and petunias; and construction of a rainproof, concrete burrow.

After tortoise-tailoring their yard in the spring, and waiting months on Tortoise Group’s adoption list, the Byrneses made it to the front of the line on the last weekend of summer, when they welcomed Dee to her new home—marking McDonough’s 40th desert tortoise adoption of the year.

“I always want an animal of any kind ever,” said daughter Sarah Byrnes in her backyard as Dee meandered through the lawn, having crawled past a sniffing Shiloh the Miniature Australian Shepherd and making her way toward twin cats Benjamin and Franklin. (Although tortoises can spread diseases to other tortoises, they cannot infect other household species.)

Quick to draw an entourage of animals by her side, Dee likely won’t be hard to find, should the Byrneses need to take her inside on a cold day. But since she’s a tiny tortoise in a big backyard, the family isn’t taking any chances. Shari plans to install a geo-tracking Tile device (the same kind often attached to keys) on Dee’s shell: “We’re going high-tech with this tortoise.”

It’s a practice welcomed by Tortoise Group as one small step toward helping keep this small threatened species out of harm’s way.

This story also ran on KUNR.org. 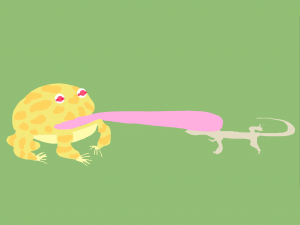